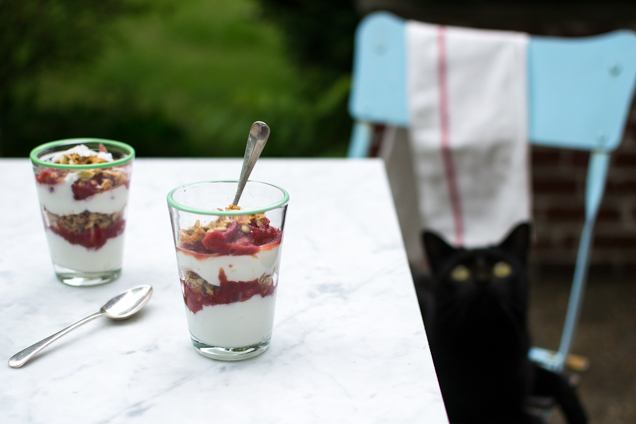 When Europeans, like us, think of a parfait, they think of a frozen French ice cake-like dessert. Not of a layered dessert in a glass, and certainly not of a healthy breakfast treat with yoghurt, fruit, and granola. But after almost 4 years in The States, I’ve adopted some typical American terms, so a parfait has become a layered yoghurt breakfast dish to me (just as an ‘entrée’ has become a main dish instead of a starter…). I prepare these little yoghurt parfaits with al kinds of fruit, but since it’s still rhubarb time, I’ve made these with a rhubarb-honey compote. Very simple, very tasty. I like to eat them on lazy Sundays with our homemade granola as a sort of ‘breakfast starter’, but they’re also good during the week as a breakfast on the go in a cup with a lid.

1. First make the compote. Combine all the ingredients in a small heavy saucepan, bring to a boil over medium heat, stirring occasionally, until the rhubarb has fallen apart, but some whole pieces still remain, about 7-10 minutes. Remove from the heat and let cool until lukewarm or cold. 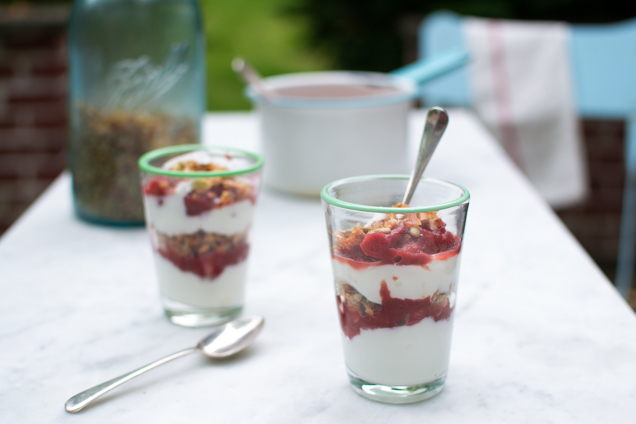