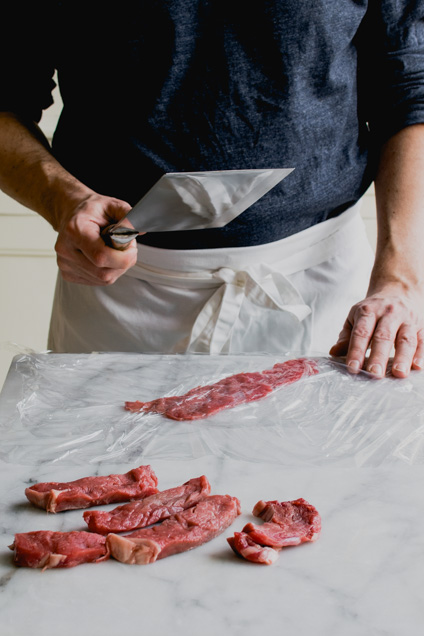 This is not my butcher. This is my husband preparing one of his favorite subs: Philly Cheesesteak. We had our first Philly Cheesesteak while living in the US and have been making it ever since. I know that people can be skeptical when it comes to preparing a good cheesesteak sandwich. They have discussions about what ought to be in it and what not. Well, mine is not traditional, that’s for sure, but I prefer it over the way too greasy Philly cheesesteak I once had in Philadelphia at one of the ‘original’ spots for cheeseteak. This recipe contains homemade garlic mayonaise, mustard, good quality cheese ánd green peppers: hopefully I don’t offend anyone. Both my recipe and pictures were featured in the Dutch culinairy magazine Elle Eten (Elle Food) a couple of months ago, where I have a column, called Hit Parade. 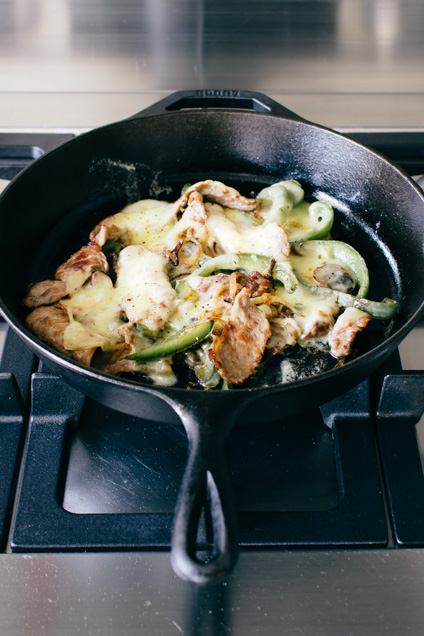 Make sure the bread is not too compact and hard: choose hoagie rolls or sub rolls. In the Netherlands I use the so-called Surinam sub rolls (Surinaamse puntjes). I hollow out some of the soft bread inside in order to let the cheesy meat topping shine. 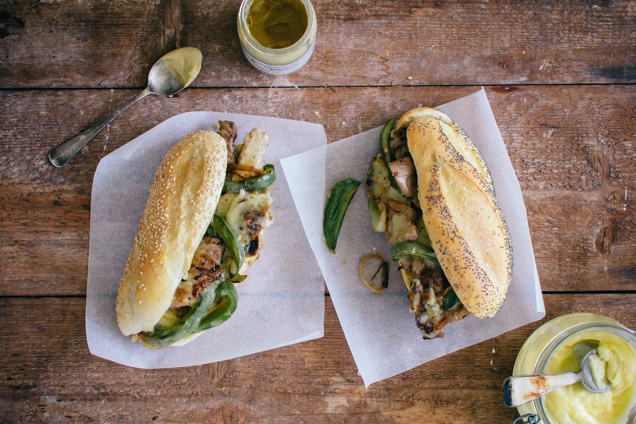 1. Cut the steak into about 1 inch/2,5 cm thick strips. Put a strip in between 2 layers of cling film and flatten using a rolling pin or cleaver until the meat is really thin. Repeat with the other pieces of meat.

3. Season the slices of meat. Heat some olive oil in the pan and lay the slices side to side in the pan. Pan-fry them over a high heat, 30-45 seconds each side. Turn down the heat and mix in the onions and pepper. Work quickly, it’s okay if it looks somewhat messy and the meat breaks up. Top the mixture with the cheese slices, cover with a large lid and let the cheese melt.

4. Slice bread lengthwise to open and hollow out some of the soft bread from inside. Spread bread with the mayonaise and mustard. Using a spatula, scoop the meat topping with cheese into the rolls. Eat right away! 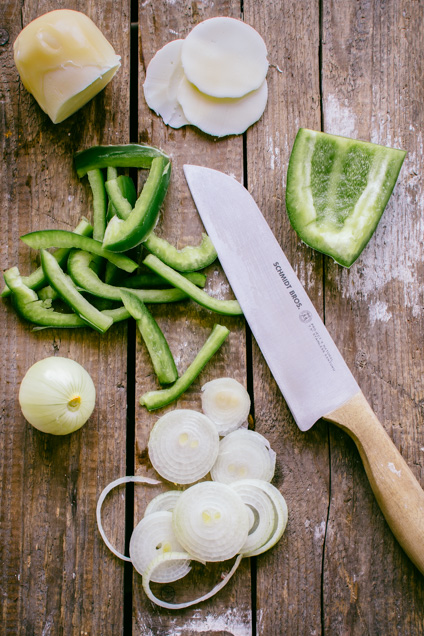 Garlic Mayonniase
In a bowl whisk (by hand or with an electric hand mixer) 1 egg yolk with 1-2 tsp lemon juice, 2 tsp mustard, 1 minced garlic clove, a pinch of salt, and 1 tsp cold water until frothy. Whisking constantly, very slowly dribble ¾-1 cup/ 200-250 ml mild canola or sunflower oil into the egg yolk mixture, until the egg yolk absorbs the oil en the mayonnaise thickens. Now you can add the oil a little faster in a thin stream, keep whisking. Add more salt and lemon juice to taste and grind over some black pepper.