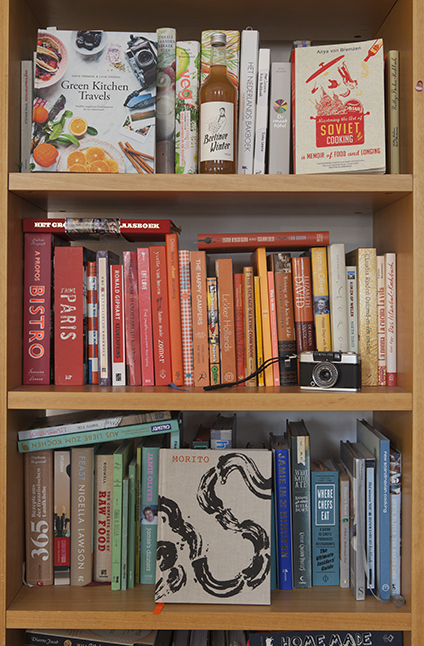 Could we imagine life without cookbooks? Probably not. Each time we tell ourselves: no more cookbooks, enough is enough. None, not even cheap and used books. Not on the e-reader either. But we fail, every time. We read cookbooks at our desk, on the sofa, in the kitchen, in bed, when travelling. Sometimes we send each other a book that is not yet for sale in the USA or in Germany. And sometimes we make little lists for each other like this one: 10 cookbooks that in some way have to do with travelling.

ALICE WATERS AND CHEZ PANISSE
Reading about chefs and restaurants is just as good as reading cookbooks. In this biography the author Thomas McNamee tells the fascinating and intriguing history of the romantic, charming, eccentric Alice Waters and her Berkeley restaurant Chez Panisse. The book was published in 2007, but is nevertheless a valuable addition to every culinary library. Just as Waters’s cookbooks of course: The Art of Simple Food I and II are important works that we often turn to for advice.

THE BREAD EXCHANGE
The Swedish born Malin Elmlid lives in Berlin and became famous for her delicious sourdough bread, that is NOT for sale. You can only get it by trading: “I trade for anything that could inspire me, or teach me something. I trade for anything that you do better than me, anything I haven’t tried or known before.” It’s such a great idea. In the book her bread together with Malin travels around the world. It’s beautiful and contains all kinds of recipes with the focus on bread.

BUVETTE
Chef Jody Williams worked in some of the best kitchens in the US, Italy, and France before opening Buvette in 2010 in New York City, where she lives. She recently opened a second Buvette in Paris, where she also lives, lucky woman! It’s one of our favorite bistro’s to go when in NYC or Paris. The breakfasts are really good, but they are also great places for sharing drinks or dinner with friends. The setting is very informal, just the way we like it. Last year the Buvette cookbook came out: wonderful and with easy to follow recipes. We bought it at Buvette as a souvenir after a delicious meal there.

A CHANGE OF APPETITE
We own more books by the British Diana Henry, so we ordered A Change of Appetite without even seeing it. Just as in her other books, Henry’s recipes are inspired by the food of the Middle East and Far East, but also by other cuisines like the Scandinavian and Georgian. This time she focuses on ‘healthy eating’: less meat, lighter dishes, more vegetables, whole grains, and fish. And she gets it right! She doesn’t preach about healthy food but instead she seduces you with beautiful and mouthwatering recipes.

GREEN KITCHEN TRAVEL
The authors Luise Vindahl and David Frenkiel love to travel, cook and photograph. Sounds good! Their recipes are mostly vegan and sometimes even raw, the pics are wonderful, and so are the accompanying stories. It’s their second book, and yes, we own The Green Kitchen too.

MASTERING THE ART OF SOVIET COOKING
Such a beautiful book: the Russian Anya von Bremzen fled the USSR in 1974 and went to the USA together with her mother. This book tells the story of 70 years Soviet Union, as seen through the eyes of Bremzen’s family and through food. Reads like a Russian novel: the book contains almost no recipes.

Find Anya von Bremzen on Twitter and order the book at your local bookstore or online.

MORITO
Should we have to throw out all but a few of our cookbooks, we would definitely hang on to the ones from Moro. After Moro, Casa Moro and More East we bought the 4th book by Sam and Sam Clark almost without even browsing through it first. This book is about their mezze & tapas restaurant Morito in London. The photographs make us more than happy.

MY PARIS KITCHEN
David Lebovitz, the author of this book, used to work in the kitchen of Chez Panisse and has been living in Paris for quite some time now. He blogs about his life there, about what you can eat and where, about the different arrondissements, and about the fact that Paris doesn’t have one distinct cuisine. The city is as much a melting pot as all other big cities. The recipes in this book are from all over France and all over the world.

SCANDINAVIAN COOKING
We both own this book. The American version has a beautiful cover, but the German version is – we’re sorry to say – a bit boring. The recipes are very good, especially for those who have an interest in Swedish cooking. The author, Tina Nordström, is world-famous in Sweden: she even has her own TV-show. We like the book a lot.

Find Tina on Facebook and order the book at your local bookstore or online.

TWELVE RECIPES
This book is full of love and passion! Cal Peternell, chef of Alice Waters’s Cheze Panisse, sent off his oldest son to college with a good knife, a skillet, a cutting board, a colander, and 12 recipes. This collection of 12 recipes gradually became an affectionate cookbook. A book with beautiful pictures of Peternell’s family life and with illustrations by his wife and kids. The recipes are mostly Italian, since the chef once lived in Italy and Italian food inspired him to become a cook. If there is one book that we want to give to our children when they leave home one day, it will be Twelve Recipes.